Heroes of Fortunia version 0.6.0 is now live. This update brings a new dungeon theme, some mechanic adjustments as well as some balance changes with it. Please update your game to the latest version in order to keep playing.

With the release of 0.6.0, the current dungeon challenge has come to a premature end, as we prepare future challenge dungeon to be in line with the new mechanics.

Replays recorded on version 0.5.2 and below are not compatible with version 0.6.0 and have thus been removed from your attack log.

We have re-evaluated our stance on the rarities in the game, and have decided that a component’s rarity should be related to the complexity of the component, as opposed to its power level. The one exception is legendary components, which are going to be those we deem to be so strong that having multiple copies of them in a dungeon would be too powerful.

Rarities are now assigned as follows:

Although these definitions are still relatively vague and open to interpretation, based on them we have made the following changes to the rarities of existing components:

Additionally, we have made the following changes:

We have also fixed an issue that caused the heroes’ mobility skills to behave incorrectly depending on frame rate. This means that certain mobility skills (such as the Knight’s) might be much more useful to you now depending on your graphics card. We do encourage you to try out every hero again to see what has changed for you!

Weekly Glimpse #3: The History of Heroes of Fortunia 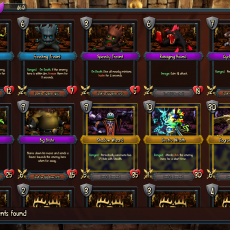